With only hours left on Earth I thought it would be useful to go over this ancient doomsday prediction. How and why did the Mayans predict the end of the world? Why is doomsday occurring on December 21st 2012? Can we trust this wise yet extinct civilization? All of the answers plus information on the Mayan calendar are here!

Don’t Listen To The Crazies

First and foremost there are many doomsday “theories” on the internet. One more popular theory is that a planet named Nibiru or “Planet X” will strike and demolish the Earth. This is simply not true and is based on speculation and story-telling, not science. Wanna know how I know? I just looked out my window and I don’t see a planet taking up the entire sky. Also, theorists thought it would hit in 2003. Pretty credible people. The same would go for a giant asteroid AKA a comet. We would’ve seen it coming long ago. Another popular doomsday theory is that the Sun will burst or send catastrophic solar flares hurdling toward Earth. Earth is barraged with solar flares regularly but thanks to the Magnetosphere we don’t see the effects on the ground. Sometimes strong flares effect communications and the power grid but nothing suggests that the Sun will burst or flare up tomorrow. The Sun, in fact, has an 11-year cycle of flare activity. While we are reaching the peak of that cycle Earth’s creatures are still well within the bounds of survival.

This calendar has long been known for it’s complexity and accuracy by scientists and archaeologists. It is comprised of three main cycles or circles. The Tzolkin (260 days), Haab (365 days), and the Universal or Long count (52 years). The Tzolkin and Haab create many different combinations as they spin through the cycle and are only repeated once every 52 years (the length of the long count). The Mayans also had their own day counting system just as we have the Julian day counting system. They used this to count the number of days since the creation of the world. Here are some of their counting conversions:

The Mayans used multiples of 20 (other than the Winal) for their counting system. Their year was comprised of 18 months (Winals) of 20 days and 1 month of 5 days. While the Mayans would use hieroglyphs a modernized long count date stamp would look like “12.3.6.2.1” where 12 is the number of Baktuns (from the beginning of time) and 1 is the number of Kins.

How Do Our Calendars Coincide? 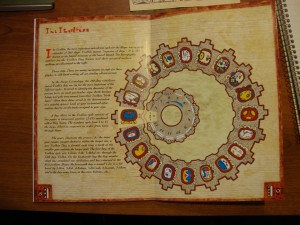 A gift I received from Mexico depicting a Tzolkin which has 20 thirteen day cycles or 260 days.

If the Mayans were to claim that the end of the world were to occur 3,782,456 days from the “beginning of time” how would we know what day that falls on our calendar. After all we can’t just ask them. The simple answer is to find the date that they called the beginning of time. By comparing their text and stories of astronomical events, astronomers were able to “hind-cast” with computer models or re-create eclipses and planetary movement in the past to line up their calendar relative to ours. The beginning of time, to the Mayans, was approximately August 13th 3114 BC. The Julian Day numbering system starts January 1st 4713 BC or 584,285 days earlier. Since we now know the difference between the two calendars we can now see what days the Mayan’s foretold something to happen.

So what did the Mayans say for December 21st 2012? Nothing. The date actually represents the beginning of a new Baktun, the 394 year cycle. The new date stamp will be 13.0.0.0.0. This meant the end to an old era and the beginning of a new era and would be a great cause for them to celebrate just as we do for new years. Their calendar was often misinterpreted by people who thought that there wasn’t another Baktun. But just as 2013 is sure to come, a new Baktun is sure to come. In fact I believe that the Mayans grasped the concept that time may never end. They have another cycle called a Pictun which is 20 Baktuns or ~8000 years! It looks like we will all live to see another Kin.